Nigerian academic Dr. Opeyemi Enoch has solved a maths problem, which has gone more than 150 years without a solution. The Riemann
Hypothesis was first proposed by Bernhard Riemann in 1859. As the first person to provide a solution, Dr. Enoch has been awarded a million dollar prize. 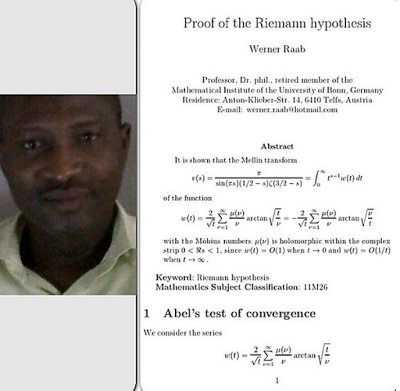 The 156 years old Riemann Hypothesis, the most important problem in Mathematics has been successfully solved by Nigeria Scholar,DrOpeyemiEnoch.

With this breakthrough,DrEnoch, who teaches at the Federal University, Oye Ekiti (FUOYE), has become the fourth egghead to resolve one of the seven Millennium Problems in Mathematics.

The Kogi State-born mathematician had, before now, worked on mathematical models and structures for generating electricity from sound, thunder and Oceanic bodies.

A statement in Ado Ekiti yesterday said Dr Enoch presentation of the Proof on November 11, 2015 during the International Conference on Mathematics and Computer Science in Vienna, Austria becomes more symbolic coming on the exact day and month 156 years after the problem was delivered by a German Mathematician in 1859.

The Riemann Zeta Hypothesis is one of the seven Millennium problems set forth by the Clay Mathematics Institute with a million Dollar reward for each solved problem for the past 16 years.

According to the statement, “DrEnochfirst investigated and then established the claims of Riemann. He went on to Consider and to correct the misconceptions that were communicated by Mathematicians in the past generations, thus paving way for his solutions and proofs to be established. “He also showed how other problems of this kind can be formulated and obtained the matrix that Hilbert and Poly predicted will give these undiscovered solutions. He revealed how these solutions are applicable in cryptography, quantum information science and in quantum computers,” it stated. Three of the problems had been solved and the prizes given to the winners. This makes it the fourth to be solved of all the seven problems.

DrEnoch had previously designed a Prototype of a silo for peasant farmers and also discovered a scientific technique for detecting and tracking someone on an evil mission.